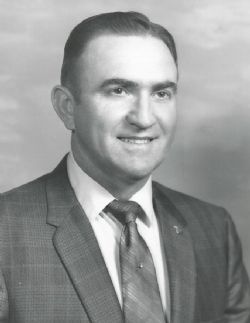 Curtis was born on October 6, 1925 in Coleman County to William Henry Henderson and Vernon Willie Jordan Henderson. He was a member of the College Street Church of Christ and served the church in various capacities.

He was raised on the family ranch in the Burkett Community and started school at the Echo School until the 3rd grade and then attended and graduated from Burkett High School. After high school, he attended Tarleton State where he played basketball for two years and majored in Animal Science. After his sophomore year, he transferred to Texas AM College entering the Corp of Cadets, Company D Infantry, known as Spider D. At the end of his junior year, he was inducted and served in the Korean War. Upon his return, he continued school and received his BS from AM, class of 47. He also did graduate work at Texas AM, New Mexico State and Colorado State University.

Curtis met the love of his life Frances Ann in 1944 on a blind date and after dating a short time, nicknamed her Dusty. They were married December 27, 1947 and spent 66 wonderful years together. His love for agricultural, people and kids, lead him to pursue a career as a County Extension Agent starting in Navarro County in 1948. In 1951 they moved to Irion County, then in 1960 moved to Kimble Co. where he retired in Oct. 1980, after 32 years of service.

One of Hendersons principal interests during his tenure as county agent, was the young people. One of his greatest enjoyments was working with 4H members and their livestock projects for county and state shows. He maintained and strengthened a comprehensive 4H program that had much favorable influence upon the development of young people. His graduates of 4H are seen in agricultural and business leadership roles throughout the state.

He was an avid hunter and fisherman and enjoyed sharing these experiences with his family, grandkids and friends. Upon retirement, he and Dusty enjoyed traveling across the states.

Memorials may be made to West Texas Rehab, Hospice or a charity of choice.