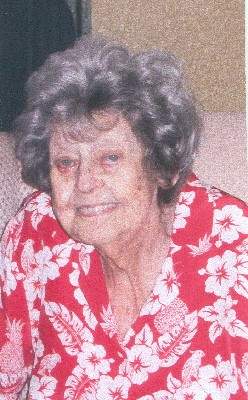 
Junction Virgie West Craig went to be with the Lord on December 23, 2011 in Junction, Texas. Born January 24, 1909, in Ballinger, Texas, she was the daughter of James Anderson and Almira Buena Stanton West.

A Memorial Service will be held at 10:00 AM on Saturday, January 7, 2012 at First Baptist Church, Junction, Texas. Graveside Services will be January 18, 2012 at 11:00 AM in San Jacinto Memorial Cemetery in Houston, Texas.

Virgie was preceded in death by her parents her four brothers and five sisters her loving husband, Nicholas Palmer Craig and two grandchildren.

Virgie lived in Burkburnett, Texas from age 3 to 23. She taught school in Burkburnett for two years. It was there she fell in love with the football coach and was married to Nicholas Palmer Craig in 1930. She and Palmer lived in Quanah, Tahoka, Rosebud and Stockdale, Texas where he coached. In 1942 they moved to the Houston area where Palmer was a math instructor at Ellington Field. They moved to Galena Park, TX in 1944 where they lived for many years. Virgie taught in the Kincaid Private School for one year, then began teaching in the Galena Park School system. She went back to college in 1946, while still teaching at Galena Park, and she received her degree from the University of Houston in 1949. She began teaching in the Houston school system in 1950 and taught there until her retirement in 1974.

Virgie was active in the local, state and national teacher organizations, attending both state and national conventions. She loved to travel, visiting many different states, and traveling to nine countries in Europe, Canada, and the Holy Land. Virgie became interested in genealogy after her retirement and spent many hours
Researching and documenting the family ancestry. She was a member of the Daughters of the American Revolution and the United Daughters of the Confederacy. She was an active member of Eastern Star for many years in Galena Park. Virgie was a long time faithful member of First Baptist Church of Galena Park.

Virgie moved to Kerrville in 2000 and lived in an assisted living facility. She moved to Junction in 2009 where her home was the Hill Country Care Center. When she moved to Junction, Virgie became a member of First Baptist Church, Junction, where she attended services as long as she was able.

In lieu of flowers, memorial donations may be made to the First Baptist Church, Junction, Kimble County Library, or the charity of ones choice.

To order memorial trees or send flowers to the family in memory of Virgie Craig, please visit our flower store.