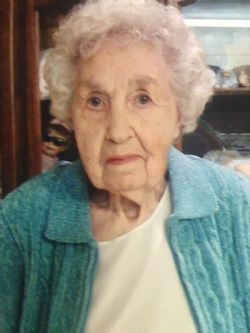 
Vevia Mary Hayes, 96, of Junction, Texas, formerly of Kingsville, passed from this life on July 6, 2018 at a local care facility.

Vevia was born December 15, 1921 in Johnson City, Texas to Arthur H. and Sara Dillon (Brown) Jones. She grew up in Bandera, Texas. She married Bernard Holmes Hayes on March 30, 1940, they lived and raised their family in Kingsville, Texas. In her earlier years, before becoming a homemaker, she worked for the US Navy on aircraft as a civilian during WWII. Vevia loved dancing, cooking, and enjoyed going places. She was always ready to go on trips and see new places. She lived a long life and took care of many family members, including her grandchildren, throughout the years.