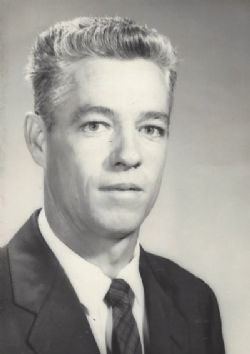 
Toliver Albert Chandler, age 87, of Junction, Texas passed from this life Sunday, August 27 at home in the presence of family and friends in the house where he had lived since 1963. A memorial service is scheduled at the First Baptist Church in Junction on Sunday, Sept. 3 at 4:00 pm with the Reverend Lewis Allen officiating.

Born April 20, 1930 in London, Texas to Toliver Albert ''Coley'' and Erna Chandler, Toliver Jr. was the middle of seven children and the only son among six sisters. He attended school in New Mexico and London where he graduated from London High in 1948. After graduation he enlisted in the U.S. Navy where he served four years aboard an aircraft carrier and a destroyer during the Korean War. Upon discharge from the Navy, Toliver completed an undergraduate degree from San Angelo College and moved to Austin to attend the University of Texas. There he met and married Virginia Brooks on June 2, 1955 and they moved to Fort Worth where he worked for Texas Electric Service until moving back to London where he and Virginia both taught in the London School. Toliver taught math and chemistry and was the coach of the London Lobo six man football team. In 1961 the family moved to Junction where Toliver would spend the next 43 years teaching math to generations of Junction High School students. Over the course of several years Toliver and Virginia attended the University of Texas, West Texas State, Southwest Texas State and Sul Ross State universities earning master degrees in their respective fields.

When not teaching, driving a school bus, working the clock and scoreboard at football games or managing the local swimming pool during the summers, Toliver regularly fished the Llano Rivers and hunted the Hill Country. He passed on his love of the outdoors to his children, nieces, nephews, grandchildren and students for forty years and caught his share of catfish which he regularly fried for special occasions.

After retirement from Junction ISD, Toliver worked for First State Bank Junction for several years while raising goats on his Cedar Creek ranch.

He is preceded in death by his mother and father; his son, Toliver Albert III; his wife of 59 years, Virginia; and sisters, Ethel Orgain, Teresa Crenshaw, and Jackie Baylor.

He is survived by son, Tim Chandler and Wife Ginger of Abilene; granddaughter, Brittany Arbour, husband, Jeff and great granddaughter, Ashby of Baton Rouge, La; grandson, Logan Chandler and wife Melissa of Waco. He is also survived by sisters, Darlene Randle and husband Charles of Junction, Kathy Moss of Junction, and Cindy Skaggs and husband Dick of Salado; and numerous nieces, nephews and close friends.