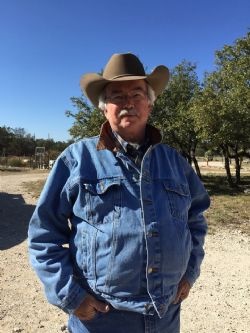 
Richard Bernard Moak Rickie to his family was born January 25, 1953 in New Orleans, Louisiana to Jerome and Dorothy Moak. He had two older brothers, Terry and David, and was followed by baby sister, Sherry. The family grew up in rural Tylertown, Mississippi, where Richard learned the importance of hard work and independence, living off the land, and hunting, which would become a lifelong passion.

In the midseventies he graduated from Mississippi State University with a Bachelors degree in Landscape Construction, but pursued a career in the thenbooming oil industry, one he would be a part of for the next 40 years. His job led him in travels across the world, including China and South America, but it was in Houston, TX where he met the love of his life, Sue Smith, over a cup of coffee in the office.

The two were married May 11, 1981. Richard threw himself head first into the responsibility of being stepfather to Sues two teenage sons Larry and John, and their family soon welcomed daughter Sarah.

After taking a hunting trip to the Hill Country, Richard, a selfdescribed converted Texan, and Sue began visiting often and fell in love with the unique landscape, hardy wildlife, and friendly neighbors. In 1989 they bought the Rockin RS Ranch 54 acres between Junction and Menard where they would spend every spare moment they had. Starting with a handmedown trailor, they eventually built two cabins and brought on longhorns Woodrow and Gus, named after the heroes of Lonesome Dove. If he wasnt on his own ranch, Richard could be found hunting with friends or coworkers, such as longtime friend John Calkins, in South Texas or places as far flung as Mexico and Montana.

When not brushing up on native landscaping or visiting local distilleries, Richard and Sue loved attending concerts for Texas musicians like Carolyn Wonderland and Willie Nelson at worldrenowned venues like Odeon Theatre in Mason, Floores Country Store in Helotes, the Mucky Duck in Houston, and the Backyard in Austin. The two especially enjoyed traveling the Southwest, particularly Albuquerque, New Mexico, and in October took the inaugural trip in their travel trailer, dubbed Bernie Ann an early present for Richards retirement planned in February to West Texas, sightseeing in Big Bend and visiting the McDonald Observatory for stargazing.

Family was especially important to Richard. Not much for parties, he still loved to host Family Fun Fest gettogethers in the Hill Country, where everyone would tube the South Llano River while he cooked his renowned fajitas with homemade guacamole and salsa. Above all else he was most proud of his grandchildren. He never ceased to be amazed by the hard work of his oldest grandchildren Anthony and Natalie and the technical or artistic talents of his grandsons Larry Michael and Jeremy and granddaughter Lexi. He got a kick out of seeing his own features reflected in his littlest grandson Bixby. And he took great pleasure in teaching lessons on hunting and life to his grandson Zachary and grandnephews Caleb, Cameron, and Carter. He was fortunate enough to spend his last days doing just that, spending time with his wife and family in the place he loved most.

Known among friends and family as a strong leader, skilled gardener, expert hunter, excellent cook, humorous storyteller, Crown Royal connoisseur, and wonderful husband, father, and grandfather, he will be greatly missed by many.

Richard is preceded in death by his father Jerome Moak and brother David Moak. He is survived by his wife Sue Moak mother Dorothy Cummings sister Sherry Nored brother Terry Moak daughter Sarah Moak Hyman stepsons John Stavinoha and Larry Stavinoha grandsons Bixby, Zachary, Jeremy, Larry Michael, and Anthony granddaughters Lexi and Natalie greatgranddaughter Chloe and greatgrandson Anthony. A private memorial service will be held on the familys ranch. In lieu of flowers the family asks that donations be made to the Texas Parks and Wildlife Department.

Arrangements are under the direction and personal care of the professionals at Kimble Funeral Home. 3254463076
To order memorial trees or send flowers to the family in memory of Richard Moak, please visit our flower store.
Send a Sympathy Card