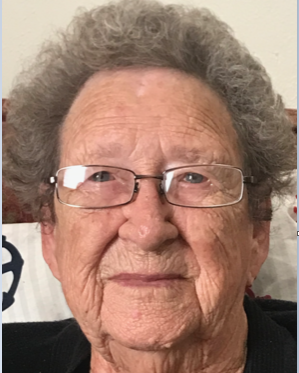 Martha Ann Bannowsky Jacoby departed this world on December 25, 2022. Ann was born in Kimble County, Texas on April 10, 1928 to Alfred Amasiah Bannowsky and Minnie Furr Bannowsky. A baby of the depression, she managed to be the only child of a large extended family for nine years before her brother Jimmy Louis Bannowsky was born in 1936, followed by Virginia (Ginger) Hope Bannowsky Loeffler in 1939.

Ann attended Abilene Christian College for two years, before returning to Kimble County, working for Texas Ranger Captain, Gully Cowsert, until her marriage to William Roy Jacoby on June 16, 1950. They made their home on Cajac Creek for a short period before purchasing and moving to the ranch in Menard County in January, 1952 where they resided for the rest of their lives. They had a daughter Martha Jane Jacoby Porter on April 15, 1951, followed by Nancy Ann Jacoby on December 10, 1952, Letha Ellen Jacoby Gonzales on December 10, 1955 and Jamie Roy Jacoby on January 14, 1959.

Graveside services will be held at 11:00 AM, December 29, 2022 at Rest Haven Cemetery in Menard, Texas. Pallbearers will be her grandsons, Jess, Coby, Kevin, Andre and Ian, and nephews Mark Loeffler, Brian Loeffler and Tate Bannowsky.

To order memorial trees or send flowers to the family in memory of Martha Ann Jacoby, please visit our flower store.