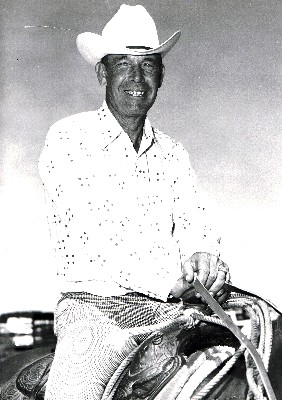 
Junction Marshall Lewis Kinkead, 89, passed from this life at his home on November 9, 2010 with his family by his side.

Born in Lucille, NM on August 25, 1921, he was the son of James and Nell Kinkead, who were descendants of pioneer families that homesteaded near the cap rock and Montoya Valley in eastern NM.

Lewis was a cowboy from an early age where he helped his father with the ranch work and riding. As his dad gradually increased the ranch size as other homesteaders would move on, he was constantly working on his roping skills that would later serve him well as a professional roper. Lewis missed the fourth grade while staying out one year to help his dad at home. Lewis often said that the fifth grade was his hardest year because he had a lot of quotmaking up to doquot. He was a natural athlete and was the tennis champion in high school. Lewis was an avid golfer and an enthusiastic competitor.

At the age of 12, he entered his first rodeo competition, riding his beloved pony, Popcorn, at a race on a dirt track in Quay Valley. He said he won 10.00 for winning that race. He went on to enter other races until he retired and participated on all events but his real love was in roping, making National Finals in Steer Roping for a number of years. One rodeo announcer had said that Lewis had thrown enough loops in his lifetime to reach around the world. Lewis had honed his roping skills working on the family ranch, roping cows and calves when they were being doctored and for the spring branding.

Lewis served in WW II and had mentioned that his hobby was rodeo, and when his recruiter heard this, assigned him to radio school.

He met his sweetheart, Letty Jo Massey, a beautiful city girl from California, and in 1943, they were married in Santa Fe, NM. They made their home south of Montoya, NM and gradually acquired their ranch after many years of hard work. They retired 8 years ago and moved to Junction to be closer to family.

Lewis was an avid horseman and was well known for being a good judge of horses, always riding top quality horses. He was a great horse trainer and coach for many competitors, including his daughters, who went on to compete in collegiate and national levels.

A blueeyed, softspoken man and when he did speak, it was to add value to the conversation, whether it was something humorous or advice on working cattle and horses. He was once asked to be the Marlboro Man, but declined because he had already quit smoking.

To Lewis, being a cowboy was a way of life, not a hobby, and he carried himself this way in his statue and demeanor.

He is predeceased by his parents, a brother, Howard and two sisters, Jennie Lou Fields and JoAnne Young.

Those left to honor and cherish his memory are his wife, Letty Jo his two daughters, Linda Johnston and her husband, Tom, of Junction and Donna Patterson of Normangee, TX three beloved grandsons, who adored him, Pard Patterson of Normangee, Lewis Fordtran Johnston of Junction and Kinkead Johnston of Sweetwater nine great grandchildren a sister, Dorothy Farmer a brother, Jimmy Kinkead and many nieces and nephews.

Services will be held in Tucumcari, NM at a later date.

The family suggests that donations in Lewiss name be made to VistaCare Hospice, 1001 Water St, Ste B100, Kerrville, TX 78028 or Kimble County Library or the charity of ones choice.

The family invites you to leave a message or memory at www.kimblefuneralhometx.com by selecting Obituaries. Select quotSign Guestbookquot at the bottom of the individual memorial.

Arrangements are under the direction and personal care of the professionals at Kimble Funeral Home. 3254463076

To order memorial trees or send flowers to the family in memory of Marshall Kinkead, please visit our flower store.