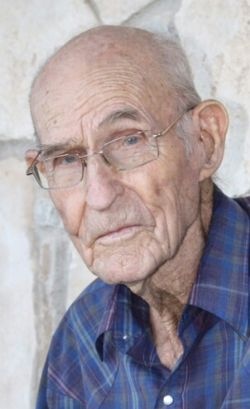 
Lloyd Wood Stewart, 94, finished his race on this earth and entered his reward on Sunday, March 8, 2015, at Park Place Manor in Belton, Texas.
Lloyd Wood Stewart was born near Junction, Texas, 19 October 1920. He was the second of three sons born to Samuel Avery and Gracie Wood Stewart.
He is the grandson of early Bear Creek settlers David Logan and Martha Ellen Wilks Stewart, and William Walker and Nancy Louella Ferguson Wood. Great Grandparents were Marcus Seveir and Elizabeth Jane Jackson Stewart, Samuel and Elizabeth McNew Wilks, John and Nancy Lockard Wood, and Joseph and Elizabeth Ferguson.
Lloyd is preceded in death by his wife, Rolene, and one brother, Ray Allen Stewart.
Lloyd is survived by five children: Irmadean Martin and husband, Buddy, of San Marcos, Sherry Welge and husband, Henry, of Doss, Monica Milton and husband, Paul, of Temple, Yvonne Novark of San Saba, and Michael Stewart and wife, Cindy, of Palestine; 14 grandchildren; 30 great-grandchildren; one brother, Tilden Stewart and wife, Nancy, of Ft. Stockton, Texas, and numerous nieces, nephews, and cousins.
Lloyd married Rolene Guthrie on October, 25, 1941, at the College Street Church of Christ building. They left Junction while he served with the Naval Seabees in the Pacific. He received his commission as Ensign in the Naval Reserve in December 1944 and was discharged from active service in December 1945.
After WWII Lloyd returned to Kimble County and worked for Highland Chevrolet for a few months and then for the Texas Highway Department for the next 30 and a half years in field parties, as state inspector, in design and construction of bridges, highways, farm to market roads and interstate 10. He was the inspector on the bridge expansion over the San Saba River in Menard and several bridges on 290 West.
Lloyd retired from the Highway Department in December of 1975 and started another career of surveying with Ben Thompson's surveying firm. This position lasted until February 1988. While surveying in Schofield, Colorado, he found another loved occupation - serving as Camp Hosts for the Forrest Service around Gunnison, Colorado.
Lloyd and Rolene spent about twenty five years as camp-ground-hosts around Avery Peak, Dorchester town site, Taylor Park, and Lake City, Colorado, retiring finally in 2001.
Funeral services will be held at 2 p.m., Sunday, March 15, 2015, at the College Street Church of Christ with Michael Stewart and Buddy Martin officiating.
Interment will follow in Bear Creek Cemetery.
Visitation is scheduled from 4-6 p.m., Saturday, March 14, 2015, at Kimble Funeral Home.

Arrangements are under the direction and personal care of the professionals at Kimble Funeral Home. (325)446-3076

To order memorial trees or send flowers to the family in memory of Lloyd Stewart, please visit our flower store.