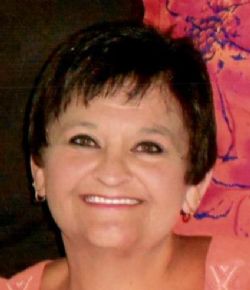 
Karen Kay Hanan Wood Mama Kay, 56, went to be with the Lord on Thursday January 16, 2014 after a short battle with pneumonia. Karen was born in Tulsa, Oklahoma on December 18, 1957 to Clifford and Lois Hanan.

The family moved to Terrell, Texas early in Karens life. Karen graduated from Terrell High Schools Class of 1976. Karen met and married the love of her life Pat Wayne Wood on Janurary 9, 1981. Three children were born to this union: Chad, Jason, and Kari Wood.

Karen worked and retired from South Western Bell Telephone Company, first in Terrell and then in Downtown Dallas. Karen loved to read, the outdoors, and hunt deer. She also never met a stranger, and always had a smile on her face. Karen and her family moved to the Texas Hill Country in the mid 90s, where they lived on a ranch and were able to pursue their love of hunting.

Karen was a gown person. Upon getting home, clothes went and gown came on. She always said that she was to be placed in a gown and housecoat when she went to meet her Lord. Karen always loved to cook, and she did the both as a Caf Owner and for the London Caf and Grill. She met and befriended so many in the London area. She also loved her granddaughters Kylie Kae and Kaelyn Wren very much.

She was preceded in death by her son Jason Scott Wood.