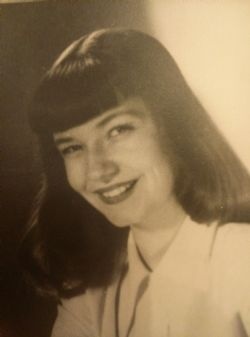 
JoAnne Hill Molesworth passed away peacefully at Hill County Care Center in Junction on Thursday, November 20, 2014. She was born in San Antonio, Texas, to Emmie Bittner Hill and Joseph Ellis Hill on January 31, 1929.

After graduation from St. Marys Hall in San Antonio, JoAnne moved to New York and studied at Barnard College where she was an ad model for several products ranging from steamirons to snow skis. She was featured on billboards promoting Coca Cola.

After graduation from college, to her parents dismay, she married John Molesworth, a rancher in Kimble County, whom she previously had met in San Antonio. She was a devoted ranchwife and a mother to three children, Johnny, Cindy and Lynn Hill.

When the nest was empty, she began a part time job at The Junction Eagle, which soon turned into a full time position as the Associate Editor for 20 plus years.
JoAnne was an accomplished bridge player, often traveling the country for tournament play as well as playing in local clubs and at home.

The family would like to thank the very caring and dedicated staff at Hill Country Care Center as well as special friends, Joe and Mary Rios. In lieu of flowers, the family requests all donations be made to Meals on Wheels or Kimble County Library.