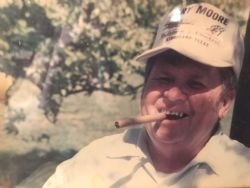 
Henry Michael "Hank" Kuentz, Jr. 84. passed away at his ranch in London, Texas on Tuesday, November 7, 2017 after a long battle with cancer.

Hank was born November 3, 1933 in San Antonio, Texas. After graduating from Brackenridge High School he pursued a career in electronics. Hank was hired by Philco Ford Electronic Communications and sent overseas to do classified government contracts.
Hank moved to Blanco in 1969 and went to work for Data Point Electronics in San Antonio. Hank was a licensed electrician and opened Kuentz Electric. He then moved to Kingsland and opened Sunliving Manufactured Housing. Hank retired in 1995 and settled in London, Texas.

Hank was the type of man who never met a stranger. He loved his family, ranching, hunting, fishing, and telling stores about his overseas adventures. He was known as a legend in the Hill Country and will be missed by many.

Per family request, please no flowers.