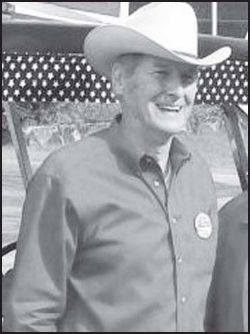 
Leonard Gene Coleman of Junction died August 10, 2016 at his home on the South Llano River that he loved. Born to Adah Leonard (Mayfield) and James Lewis Coleman on August 19, 1930, Gene lived most of his life in Kimble County downstream a few miles from where his grandfather Jinx Coleman had settled in 1903. He was always proud that his baptism had actually taken place in the South Llano.

Growing up ranching on the river, he was an excellent swimmer, runner, and dancer. In one school-sponsored swim meet held in the South Llano, he won every single boys'/men's event. He and his teammates won the State Championship for JHS in the Mile Relay at the State Track Meet in 1948. Old dance partners remember his love of dancing and his special smooth style. After graduation from JHS in 1948, he headed west to the oil patch. He served two hitches in the U.S. Navy, having been called back for Korea, before returning to live in Junction in 1967.

For years Gene was active in community affairs and known for his cooking: BBQ, catfish, and ''Granddad's world famous hamburgers.'' He was an early advocate for the development of the South Llano River State Park and was honored to have been chosen to cater its opening celebration BBQ. Texas Highways referred to Gene as having the ''blue-eyed charm of a Hill Country Paul Newman.'' The Coleman/Dear Thanksgiving Day on the South Llano has been a tradition for over 35 years. Nobody else can cook a ham like that!

He was an avid reader with a deep love of Texas and of natural, state and local history who instilled that love of history and of the land in his children and grandchildren. He enjoyed teaching them about hunting and fishing from this vast store of knowledge. He could discuss books, Texas history and artifacts for hours. He didn't hestitate to give you his opinion, and whoever you were, you always knew where you stood with him.

Gene had a keen mind and diverse interests. He was one of the founders of the Kimble County Wild Game Dinner Association as well as a charter member of the Legal Assistants Division of the State Bar of Texas.

Gene was preceded in death by his parents and by his brothers Billy Coleman and Jerry Coleman. He is survived by: his brother James Henry Coleman and wife Eileen of Campwood; his wife of 48 years Donnie J. Coleman of Junction; his four children: Jean Ann Coleman Bosch and husband Bob of Thornton; Shelly Louise Coleman Lofton of San Angelo; Robert Vance Coleman and wife Stacia of Lubbock; Glen Coleman of Austin; eight grandchildren - Michael, Kelly, Chris, Chad, Tiffany, Jay, Chance, and Ellie; three great-grandchildren: and several nieces and nephews.