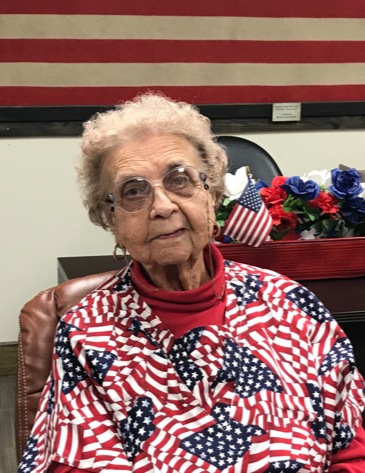 Frederica was born July 2, 1930 to John Matt, Jr. and Bessie Lee (Allsup) Burt on a ranch near Telegraph in Kimble County.  Frederica married the love of her life, Chevis R. Wyatt on January 29, 1955 in Junction; they had one daughter, Charlotte.

Frederica was an honor graduate of Junction High School, and received credits from Texas A&M and North Texas Universities where she graduated from the Institute of Municipal Clerks, she also is a Registered Professional Assessor and a member of the Board of Tax Examiners.

Frederica was first employed by the city of Junction as secretary-bookkeeper, and became city secretary in 1967.  She was Junction’s first female mayor, and held that office for 3 years; serving the city in many areas.  After choosing only one term of service, she returned to the City Secretary post; retiring after 39 years of public service.

Frederica was a talented writer and poet, and shared her gift in many ways.  She co-authored the book, Coke R. Stevenson, A Texas Legend; served as editor and chairman for Families of Kimble County; wrote and compiled, Peace in the Valley – a chronicle of the cemeteries in Kimble County, she contributed regularly to The Junction Eagle as well as writing her weekly column “Meanderings”; many other newspapers and magazines benefitted from her talents as well.

Frederica loved history and genealogy, and spent her retirement researching and using her knowledge to better her community.  She was very instrumental in working to preserve Kimble County History, working at the museum and seeing the museum moved to its new location.  She wrote the history on every historical marker in Kimble County.   Frederica spent countless hours at cemeteries, but especially the Junction City Cemetery she oversaw for many years; she knew it so well she rarely needed the map to explain a location.

Frederica’s connection to Junction and Kimble county is immeasurable; it would be impossible to list everything she was a part of, and the wealth of knowledge she had.  Overall family was the most important to her; not just her family, but all families.

Funeral services will be held 10:00 AM, Wednesday, November 3, 2021 at the First Baptist Church of Junction with Charles Hagood officiating.  Interment will follow at Junction City Cemetery.

To order memorial trees or send flowers to the family in memory of Frederica Wyatt, please visit our flower store.