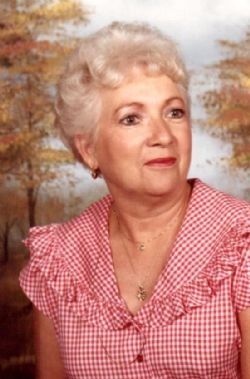 She was born in Turkey, TX on November 30, 1926 to Clyde Elmo Tate & Georgia Mattielou Tate. She was a member of the College Street Church of Christ.

She was preceded in death by her husband of 66 years, Curtis Henderson, her parents and brother, Pat Elmo Tate.

Most of her early childhood was spent in Haskell and Brownwood, TX. At the age of 13, her parents moved to Coleman, TX where she graduated from high school in 1944 and then attended Baylor University.

Frances Ann was nicknamed "Dusty", by Curtis, soon after they first started dating and on December 27, 1947 they were married in Coleman, TX. The small town "city girl" quickly became a "country girl", learning about livestock and agricultural, after Curtis accepted a position as County Extension Agent in Navarro County. In 1951 they moved to Mertzon, TX followed by their final move to Junction, TX. in 1960. They loved to travel and spent many months each year sightseeing around the states.

After moving to Junction, Dusty took on many roles like: being "Mom" for hundreds of 4-H club kids and several years as secretary of the Kimble County Chamber of Commerce. In 1971 she started working at Junction Elementary School as a teacher's aide until retiring in 1989.

She truly enjoyed life, never met a stranger and was willing to lend a helping hand wherever she could. Her hobbies included decorating, arranging flowers, gardening, oil painting, singing, cooking for family and friends along with spending time at the Buchannan lake house.

She was the "corner stone" of her family, enjoying fun times and making memories with Curtis, their children, grandchildren and great-grandchildren. A strong Christian woman who lead by example.

The family would like a give a special thanks to the caregivers at Hill Country Care Center, Hospice nurses, Maria & Pete and the many friends that visited her.

Funeral services will be held 2:00PM, Wednesday, April 15, 2015 at the College Street Church of Christ. Interment will follow in the Junction City Cemetery.