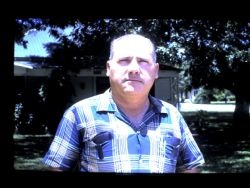 
Ennis Terry Jetton, 91, passed away on Saturday, Sept, 10, 2016 in the Kimble County Hospital surrounded by his family. Ennis, or as most people knew him, ET, was born at the old Jetton home place located on the South Llano River on December 2, 1924. Other than attending college at A&M and serving our country in the Army Air Corps, Ennis spent his entire life ranching in Kimble county.

Upon returning home from his stint in the service, ET began his ranching career with a few head of sheep that his Pop gave him and he began to lease land that the family affectionately called ''The Tanner''. It was while ET was living at the Tanner that he met and married on September 23, 1957 the love of his life, Laverne Tuckness. He inherited Vernie's son Lloyd Keith when they married and they soon added to their family with births of their two sons, Sam and Mark.

ET's greatest legacy was the impact he had on his family and friends. The stories he shared demonstrated his appreciation of the land, his passion for hunting, and his joy of flying and will live on in those who loved him.

ET was preceded in death by his wife Vernie, and his son, Lloyd Keith.