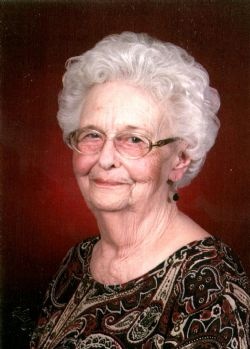 
Dortha Waddell Williamson, 93, was born August 7, 1923 at the ranch home of her parents Elkin "Babe" and Kate Reeves Waddell in Menard, Texas. She was their ninth child. To celebrate her birth, Babe purchased a Model T Ford at Murchison's in Menard for $700 and had them "put it on the bill."

An accomplished horsewoman, Dortha loved growing up on the ranch and told stories of the family's horses, Silk, Paint, Bracelet, Billy, and Dixie throughout her life. She attended grade school in the one-room Waddell Schoolhouse a mile behind the family home, making two grades in a year so she could "go into town."

There, she was fast friends with Doris Lankford and Reta Crowell. The free spirited young women referred to themselves as the "Rat Pack." Shortly before the outbreak of World War II, Dortha attended the Saturday night Race Meet dance in Junction where she met Loyd Victor "Butch" Williamson.

When Dortha's date was too much in his cups to safely drive her home, Butch volunteered. They were married on September 6, 1942, the same day the groom received his wings as an Army Air Corps Enlisted Pilot in San Antonio, Texas. The couple was married for 54 years, until Loyd's death in November 1996.

Together, they operated Buster's Laundry and Cleaners where Dortha worked "her girls" an assemblage of young local women whose alumni includes many generations. Dortha kept a plaque on her desk that read, ''No. Any other questions?" The family would like to recognize each of these women as an honorary pallbearer.

A practical and realistic woman, Dortha survived many challenges in life including the murder of her oldest sister in 1943 and the devastating loss of the laundry to a fire in 1963. She loved cats, pretty shoes, fast horses, dancing, and the State of Texas.
A fifth-generation Texan, she took great pride in her family's heritage and told wonderful stories about her parents, Babe and Kate, and grandparents, Daniel M. and Georgeanne Foster Waddell and Alf and Charlcie Blair Reeves. She considered herself a ranchwoman to the end of her days.

Dortha was a founding member of the Daedalian Study Club and served many times as president of the group. She was a three-time Worthy Matron of Junction Chapter 497 Order of the Eastern Star, and a member of the Business and Professional Women's Club as well as the Texas Cattlewomen.

Dortha was preceded in death by her parents, her siblings, and her husband. She is survived by her daughters, Delia Ruth Williamson, RPh and Rana K. Williamson, PhD, and by three special men who were her only "sons," Adolfo, Sergio, and Ivan Ponce. Other survivors include several nieces and nephews as well as her friend and caregiver, Gloria Gonzales, husband, Louis, and daughter Cindy.

A memorial service will be held Saturday, January 21, 2017 at 10 a.m. at the First United Methodist Church. A reception at the Methodist Fellowship Hall for family and friends will follow the graveside rites.