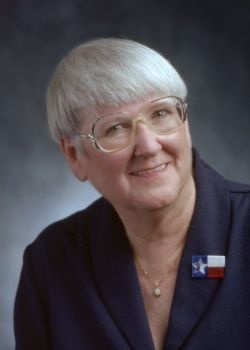 
Donnie J. Coleman died on April 4, 2019, at her home on the South Llano River at Junction, Texas, at the age of 75 years. Born to Ralph Hunter Nelson and Jeanne Wentworth Nelson of Pensacola, Florida, she was raised in Pensacola, but upon graduation from FSU in1966 moved to the Houston area where she met Junction native (Leonard) Gene Coleman. They were married in Junction in 1967, and Kimble County was their home for the rest of their lives.
Donnie was preceded in death by Gene and by her parents. She was survived by their children: Jean Ann Coleman Bosch and husband Bob of Thornton; Shelly Coleman Lofton of San Angelo; Robert Vance Coleman and wife Stacia of Lubbock; and Glen Coleman of Austin, eight grandchildren, and three great-grandchildren. She was also survived by her sister-in-law Eileen Coleman of Camp Wood, a sister Carolyn Clark of Wisconsin, and aunts, uncles, and cousins.
After marrying Gene, Donnie continued to teach school for several years before retiring and entering law school. She was admitted to the State Bar of Texas in 1979, and continued to practice law until her death. At the time of her death she was serving as the Kimble County Attorney.
She was a trial lawyer and prosecuted hundreds of cases of child sexual abuse. She was always proud of having brought sex offender registration to the 198th district two years before it became state law and of being part of the multi-disciplinary team that established the Kids' Advocacy Place in Kerrville.

She and Gene were involved in many community activities - from the Chamber of Commerce to The Wild Game Dinner to Friends of the South Llano River State Park. They loved to feed family and friends and for over 35 years looked forward eagerly to the Coleman-Dear Thanksgiving on the South Llano River. They enjoyed traveling - especially Texas and the western U.S. Both were avid readers, nature- lovers, and fans of bluegrass, Cajun, and traditional country music.
And after that first night at London Hall when he taught her to waltz, they literally waltzed across Texas together.

The Colemans will host a celebration of life event, on the South Llano River, later this year. The community will be invited.
To order memorial trees or send flowers to the family in memory of Donnie Coleman, please visit our flower store.