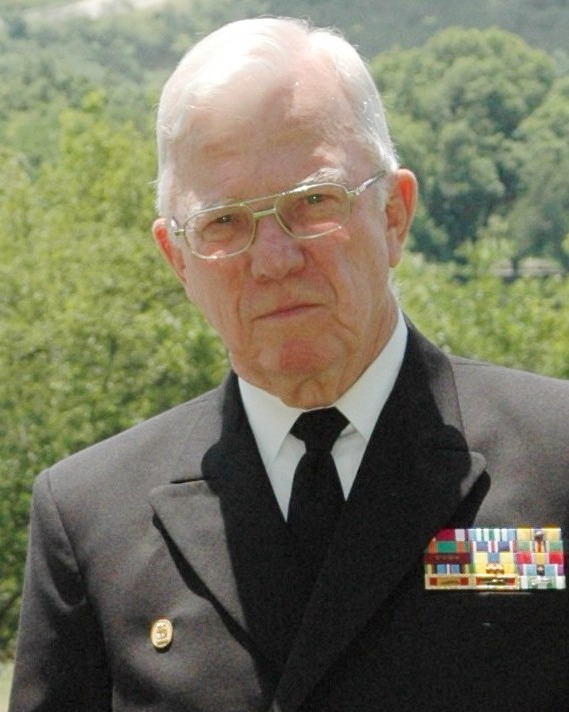 Don is survived by his wife, Jerrie Rhamy of Junction; two daughters: Judy Albus of San Angelo and Cheryl Herring of Junction; one sister, Shari Adams of Van Alstyne, Texas, as well as 10 grandchildren and 5 great grandchildren.

Among Don’s honorable and prestigious military awards, one that he was exceptionally proud of was having been chosen as the first Command Master Chief of the Navy Broadcasting Service.

Don deployed to Northern Europe and the Caribbean on the USS Yosemite as a Radioman "striker."  After a brief hiatus in the inactive reserve attending Texas University, he returned to the Caribbean, first serving on small boats, then on "The Gitmo Gazette" newspaper, and finally, at WGBY (Armed Forces Radio/TV, at Guantanamo Bay) where he worked as a radio and TV journalist-operating engineer. He served there as the Petty-Officer-in-Charge of TV during the Bay of Pigs.

Rotating to shipboard duty, Don transformed the tv system of the USS Saratoga to an Armed Forces Television Service Information, Entertainment and Education outlet. He trained his crew to operate this new system, published weekly (and daily-at-sea) newspapers, and organized and supervised shipboard tours and all other public affairs operations.

Upon his military retirement, Don was employed by the American Chemical Society in Washington, D.C. where he worked as a radio-television manager. He then enjoyed his second retirement and moved back to Texas.

As Don traveled the state retracing the places he had lived, he found himself in Junction, and visited the Kimble County Library, where he met his wife-to-be, Jerrie. After that encounter, Don made the decision to remain in Junction, to court Jerrie, and to eventually ask for her hand in marriage. He accepted Jesus as his Lord and Savior and married Jerrie in March 2006. From that time to the time of his passing, Don remained an active and dedicated member of his family. He embraced each child, grandchild, and great grandchild as his own. He was an example to be followed as a husband, father, and grandfather.

Among his many talents, Don spent a good deal of time with mechanics, carpentry, gardening, and even took up dancing. He remained an active member of the First Baptist Church in Junction where he served as a Deacon. He enjoyed his duties as a leader in the church and worked always to honor the Lord. His reverence for his country was admirable and steadfast, and his commitment to and faith in God was just as unshakeable. And above all of these was his unwavering love and devotion to his wife, Jerrie.

Services will be held at First Baptist Church in Junction under the direction of Steve Meyers on Wednesday, January 4, 2023 10:30 in the morning.

In lieu of sending flowers, the family has requested that friends and loved ones make donations in memory of Don Rhamy to the Wounded Warrior Project or a local non-profit organization.

To order memorial trees or send flowers to the family in memory of Donald Rhamy, please visit our flower store.