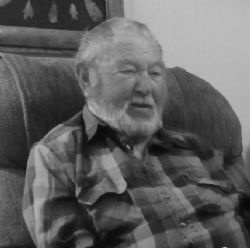 
Delton Delano Stewart was born April 11, 1933 to Everett and Jessie Stewart. After a life full of family and friends, Delton left his earthly body on August 19, 2019.

Kimble County has been greatly blessed by the Stewart Family. Delton had an older brother, William David Stewart and an older sister, Lomagene Stewart Boerm, both preceding him in death. The Stewart family worked hard on their ranch. Delton planted, plowed, irrigated and harvested his crops while doing a fine job of training up the next generation. The love Delton held for the family ranch has been passed down to his children and grandchildren. His favorite place in the world to be was out working his ranch.

Delton Delano Stewart bravely served his country in the U.S. Navy during the Korean War. After he returned home safely, he met Zeta Stanford, a cashier at Isaacks Restaurant. At dinner, his father and brother noticed the instant spark fly between these two young people and they encouraged (or maybe pushed) Delton to pursue Zeta. Soon the couple were married and the family grew.

Unfortunately, Zeta died early, leaving Delton heart-broken, but after a healing time, he met and married Alma Dean Sides and she brought along five children to join the fun life at the ranch. Then he happily adopted Dustin and Andrew after his beloved daughter, Judi, passed away. Delton lead the family activities including hunting, fishing, camping, playing dominoes and hunting arrowheads. His favorite pastime was teasing his loved ones while reminding them to love one another.

Delton Stewart was respected and highly regarded by his family and friends. When questioned about his faith, he told those close to him that he knew God, and that gives all of us hope that we will shall see him again in the great beyond.