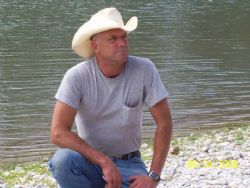 
JUNCTION David Wayne RobbinsHanna, 59, of Junction, Texas passed from this life on February 22, 2014 at his residence. David was born January 29, 1955 in Sweetwater, Texas to Wayne and Dorothy Sanders Robbins. At age 7, David was adopted by his stepfather, Ralph Hanna. He married Dorothy Delery on October 27, 2000 in Kerrville, Texas.

David was a mechanic employed by Moss Motors in Kerrville, Texas, a rancher, and an EMT and volunteer firefighter for over 20 years. He had many hobbies and interests which include: hunting, fishing, bowling, and computers. He was a member of the NRA. He also enjoyed racecars and built one for himself which he also raced. David was softspoken yet had a great sense of humor which would often catch you by surprise. He was very generous in nature and spoke many kind words about his friends and family. David was loved by many because he never met a stranger, and was always ready to embrace new family and friends. He was very proud of his family and had a great appreciation for all of them. They will miss his humor and caring nature.

David is preceded in death by his parents.

Those left to honor and cherish his memory include his wife, Dorothy Hanna of Junction children, Mark Southern of Floresville, Melanie Hanna of Seattle, WA, Katie Mooney of Kerrville, Rose Southern of san Antonio, and Zac Hanna of London numerous grandchildren brothers, Danny Hanna of Austin and Wayne Robbins, Jr. of San Antonio sisters, Tammy Lang of Kerrville and Judy Waldrop along with a host of other relatives and friends.

Graveside services will be 2:00 PM, Thursday, February 27, 2014 at the Robbins Family Cemetery in Junction with Rev. Donna Carroll officiating.