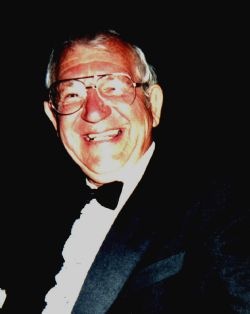 
David Richard Haas, better known as "BooCoo", passed away instantly into his New Experience on December 10, 2016 in Menard, Texas, while at a dance with his beloved sweetheart Leah.
He was born August 22, 1932, in San Antonio, Texas, to Angelina Pesquina Pedrotti and Richard John Haas. Preceding him were siblings, Lawrence Haas, Edward Haas, Virginia Dardeman and Patricia Kendrick. Surviving are his loving sweetheart Gail Leah deBruyn of Junction and his loving niece LaVon and husband Marvin Kunkel; their children Lezli Powers, her children Christen, Brittany and Ashley; Brad and wife Lezli Kunkel and children Chase, Kyle and Reid; Bart and wife Kendra Kunkel and children Courtney, Aubrey, and Bethany; and nephew Bobby Dardeman and daughter Sherry, all of San Antonio, Texas.

BooCoo attended Burbank High School, San Antonio, Texas. He served in the United States Air Force for 8 years as a Medic at Matagorda Island, Texas, England, Germany, Greece, and Pakistan. After college he was employed as a Machinist at the Long Beach Navy Shipyard in California. As a Mason he was a Shriner clown in many parades and hospitals throughout the country.

He dedicated his life to the Gold Prospectors of America, founded by his beloved friend George "Buzzard" Massie. BooCoo sold at the gold shows where he "mined the miners", and entertained at the camps with his mandolin and parrot "Pal" on his shoulder. With his excellent memory he could tell stories and jokes for hours and left trails of smiles everywhere. As a Columnist of "As the Dredge Sucks", in the Gold Prospector Magazine, he was a nationally acclaimed authority on historical American gold mining culture and personalities. With George, Tom and Perry Massie, and 200 men, he helped build the Cripple River Mining Camp in Nome, Alaska 32 years ago.

He was a lifetime member of the American Society of Dowsers, Lifetime member of Ozark Research Institute, member of Tesla Technology and a member of Religious Science Church and Eckankar Church. He liked to fish, hunt, climb, swim, golf, gamble, dig in the dirt, weld and he could fix anything! He loved to sell, entertain and studied spiritual healing.

His brilliant mind and deep compassion made you think and smile. He was self contained and knew what he liked and disliked. Though not "politically correct" he always told you what he thought, had a big heart, and wanted to help everyone. He had spirited exuberant energy to the end. BooCoo was a unique anomaly and truly, "One of a Kind", and his Great Spirit leaves behind heartfelt smiles of endearing memories and will be greatly, greatly missed by his loving family and friends. All are welcome to attend a Memorial honoring BooCoo at the G.P.A.A./Round Rock Outing in Llano, Texas on Saturday, February 18, 2017.

Donations can be made to www.eckankar.org.


To order memorial trees or send flowers to the family in memory of David Haas, please visit our flower store.