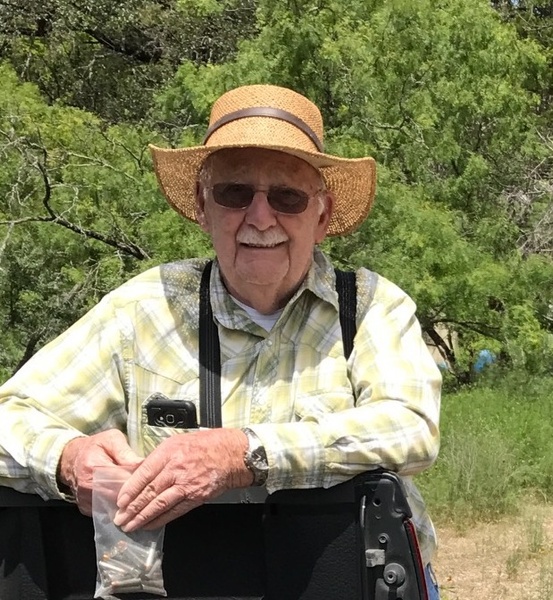 Charles Clarence White, 95 of Junction TX passed from this life on July 8, 2022 in San Antonio, TX.

He was born July 8, 1927 in Wynona, OK to parents Florence Viola Greeson and Darrell Leroy White.  Charles grew up in Toledo, OH. He met the love of his life Dorothy Jean Vaughn and they were married September 30, 1946.

Charles held numerous positions in his lifetime.  As a child he worked in his father’s tire store, later he served in the United States Navy.  After being honorably discharged from the Navy he worked for the railroad as a fireman and drove a taxi while taking automotive classes.  The family relocated to California in 1953, where he worked as an auto mechanic.  In 1956, he was hired by Rocketdyne where his position was main engine propulsion technician on the Navajo, Thor and Atlas programs.  He was promoted to leadman.  He was later promoted to field service logistics in Louisiana, where he worked as chief mechanic, rocket engines, field service on the F-1 engines on the Saturn Program.  He was then promoted to leadman of Rocketdyne Personnel in Mississippi in 1965.  Charles returned to California in 1970 at the end of the program and was laid off in 1971. Charles bought a semi-truck and travelled all 48 states hauling heavy freight as an owner/operator for 12 years.  He was later rehired by Rockwell on the B-1 Bomber Program in 1983 as a ground support technician, flight operations until retirement in 1995.

Upon retiring Charles and Dorothy travelled the country in their RV which was a lifelong dream.  Charles made Texas his permanent home following the death of his wife.  His hobbies included: hunting, fishing, carving gun stocks, gunsmithing rifles, reloading and visiting family.

He is preceded in death by his beloved wife, Dorothy Jean; his brothers, Darrell Jr., Don, Dick and John Patrick and sisters, Sarah and Florence Ann; as well as his cat Copper who he loved immensely.

Due to his wishes, there will be no memorial.  In lieu of a memorial, Charles requests those that know him just show their family love every day.

The family wishes to thank Corinne White and Jessie Bullis for their constant help and support during dad’s time of need.

Arrangements are under the direction and personal care of the professionals at Kimble Funeral Home (325) 446-3076.

To order memorial trees or send flowers to the family in memory of Charles Clarence White, please visit our flower store.
Send a Sympathy Card