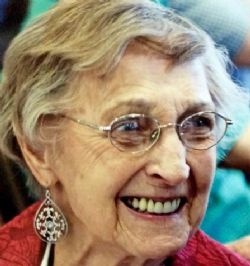 
C. Maye Neal Strange, 96, passed away on January 25, 2017 in Georgetown, Texas. She was born Clara May Dunlap on July 23, 1920 to William Ernest and Lorena Lee Chandler Dunlap. Her parents were both from long-time Crockett County ranching families so C.Maye's childhood was spent on a ranch west of Ozona. C.Maye learned to rope and ride a horse by the age of three and was one of the first women in Crockett County to rope in a steer breakaway competition at a time when there were no women's rodeo events offered.

After C.Maye graduated from Ozona High School, she attended Texas State College for Women and Baylor University. She returned to Ozona where she was employed by the Ozona Stockman and later by the Midland Reporter Telegram as a news reporter.

On June 10, 1940, C.Maye married Robert Max Neal (Bob) in Ozona. In 1946, after Bob's discharge from the service, they returned to Kimble County to build their home in Holden Hollow on the Neal Ranch in Junction, Texas and to begin their ranching business. In 1954, C.Maye opened C.Maye's Shoppe, a ladies ready-to-wear business in downtown Junction. She was often called on to stage style shows for various organizations in the area.

C.Maye held leadership positions in numerous organizations in Junction. She was a charter member of the Daedalian Study Club and was an active member of the First United Methodist Church serving on the Adminstrative Board. In 1994, she was named to the Board of Directors of First State Bank of Junction where she later served as chairman of the Board until 2013.

After Bob's death in 1981, C.Maye continued to operate both C.Maye's Shoppe and the ranching business. In 1988, she retired from the Shoppe and married Gwan Strange, a rancher from Westbrook, Texas. C.Maye and Gwan maintained homes in both Junction and Westbrook until his death in 1996. C.Maye then returned home to the ranch in Junction where she continued to live until she moved to the Wesleyan at Estrella Assisted Living in Georgetown in 2011.

Pallbearers will be the Board of Directors at First State Bank of Junction.

To order memorial trees or send flowers to the family in memory of C. Neal, please visit our flower store.