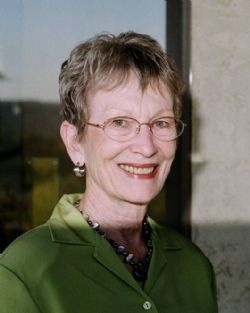 
Anne Nicholson Rose, 77, passed away at her home on February 1, in Junction, Texas. Anne was born December 6, 1939, in Driver, Arkansas, to Howell and Carolyn Nicholson. She graduated from Wilson (Arkansas) High School, where she was in the Phi Beta Kappa honor society. She was active in cheerleading and basketball, was homecoming queen, and served as a class officer. During this time, she learned to design and sew, making many of her own clothes. Anne studied at the University of Mississippi (Ole Miss), where she was a member of Phi Mu Sorority. She worked as a flight attendant for Braniff and American Airlines and was based in Dallas, Texas. In 1970, Anne moved to Colorado Springs, where she met and married her husband, Pat Rose.

Anne and Pat lived in England for several years and traveled to Belgium, France, and Spain during that time. Following Pat's retirement from the Army, they moved to Junction, Texas, where they lived at the family ranch for several years, then later built a beautiful home in Junction. Their sons, Hal and John, both graduated from Junction High School.

In Junction, Anne worked as an accountant for Hayden Woodard, CPA, for twenty-two years. She also worked as accountant and financial manager for the family ranch partnership, the Davis-Paterson and Paterson-Rose Ranches.
Anne was very active in Republican party politics; she was Chairman of the Kimble County Republican Party for more than ten years, until 2016. She served on the JISD school board and on the Bishop's committee and Alter Guild of Trinity Episcopal Church in Junction. Anne was a member of the Daughters of the American Revolution and the Daughters of the Confederacy.

Anne always had a loyal Border Collie companion that she loved and spoiled, the latest being Bella. She enjoyed spending time traveling, eating out and entertaining with friends and family. Her hobbies included cooking, gardening, feeding and watching birds and deer, her kitties, and the cows at the ranch.

She is survived by her husband, Pat; her sons, John and Hal, and daughter-in-law, Gretchen; her stepchildren David and Carol; her brothers, Howell and Bill; her sister, Carolyn; and her grandchildren, Staley, Will, Allison, Jessica, Ashley, Calvin and Ted.

Memorials can be made to Border Collie Rescue Texas, Inc. (www.bcrescuetexas.org) or charity of choice. A memorial service will be held at Trinity Episcopal Church on February 25 at 2 p.m. officiated by Kitty Lehman.

Anne will be remembered as a loving wife, mother, sister, and friend; as a wonderful cook; and as someone who loved to dance and who enjoyed people.